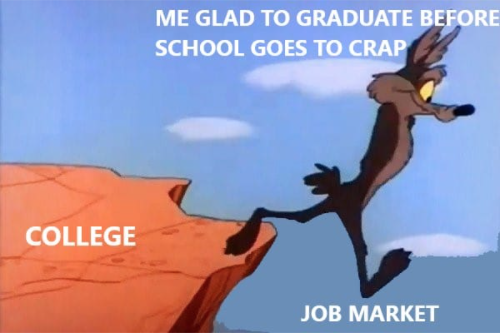 Many soon-to-be college graduates—in a time of economic upheaval and pandemic induced doubt—fatalistic and full of dread can relate to the most recent college student-produced meme.

Currently, unemployment and underemployment of new college grads is increasing, and gateways to employment like internships and other extracurricular activities are drying up or are suspended at closed or severely-restricted campuses resulting in fewer opportunities to transition to the Professional Class.

As published in Bloomberg News back in October 2020:

The unemployment rate for young people age 20 to 24 was 12.5% in September, the highest among adults. Joblessness for them peaked at nearly 26% at the height of the pandemic in April — quadruple the level two months earlier — a bigger jump than in any previous recession back to the 1940’s.

In a recent conversation with a soon-to-be UCLA graduate, he’s frustrated about a lack of job opportunities (and he is not alone) as he seeks employment as a software engineer, and worries that without having completed an internship, given the limited opportunities, he won’t find employment upon graduation in June 2021.

Furthermore, economists have proven, the pain of unemployment may be just beginning for college graduates who are usually more affected by unemployment 8-12 months after the initial economic shock.

For recent college graduates, unemployment during the pandemic peaked at 20% in June, the highest of any age group with at least a bachelor’s degree, Labor Department data show. That compares with a 13% peak in the recovery following the last recession.

And as the economic recovery has been slow(er) to materialize than early forecasts, the disproportionate impact on young workers may leave an indelible impact, lasting long into their professional careers.

Job seekers who face high unemployment rates at the start of their careers may endure lower salaries during the first decade of their professional lives, said Jesse Rothstein, an economist and professor at the University of California at Berkeley who recently wrote a paper about the impact on college graduates in the wake of the 2008 financial crisis.

The experience of Millennials who graduated into The Great Financial Crisis (GFC) in 2009 may be predictive as in the decade hence:

Employment rates for those who graduated college in the aftermath of the 2008 financial crisis remained significantly lower over the past decade compared with older workers, Rothstein found.

And, with nearly 39% of Millennials again living with their parents, the reverberations of The GFC continue affecting their economic prosperity, thus Bloomberg news also reports:

Economists say the longer that young people are forced to delay their careers, the worse their prospects will be in the future to hold a job, accumulate wealth, or even get married or start a family.

“They take jobs that will help them live and pay the bills, and when times get better they try and switch over to a preferred career path,” said Ernie Tedeschi, a policy economist at Evercore ISI. “They haven’t built the skills and the professional networks and that puts them at a persistent professional disadvantage.”

The economy will recover but to what degree and effecting what population versus another is an unresolved question. Sustained economic prosperity for older generations, comforted by the illusion that the government has their back (both fiscal and monetary stimulus to seemingly prevent the degradation of their wealth) while members of the younger generations who have played by the rules languish, increasingly unable to reach the now lofty standard of living their parents enjoy could leave a bitter taste in their mouth with wide ranging implications on the rest of global society.

For more information about how to both plan for and navigate the complex college admissions process in order to minimize the risk of educational malinvestment, contact Creative Marbles Consultancy