I just finished doing panic grocery shopping with my dad in the midst of a pandemic in Sacramento.

A week ago, on Monday, I never thought I would even say this sentence. In fact a week ago, I was worried about submitting an essay for my history class while sorting out who kept on leaving hair clumps in the suite bathroom. I remember, joking about the virus and even finding the hysteria sort of funny. I was making plans with my friends back home in Sacramento to come visit me in San Diego, and they asked “what about corona virus” to which I snarkily replied “bruh it only affects Boomers, you’ll be fine”.

Later that day, one of my dorm mates came out of her room with a depressed look on her face. “Did you hear the news?” Our suitemates were just lounging around the couch, and we all were clueless. “They are making everything online in spring quarter.” We were all shook to the core. There was a mix of emotions, and confusion. Some of my friends were like, “I’m getting tf out of this bitch.” Others like me, were going to stay, as I still wanted to participate in my lab. At that time, it looked like most of my suitemates were staying but the campus would just be a little more socially dead.

On Tuesday, there continued to be panic. News of Italy shutting down and the first case of coronavirus in San Diego appeared. But, finals were being cancelled or moved to online, which made everyone happy because cheating would be easier. However, there was a lot of anger. Everyone expected [Chancellor] Kholsla to not give us refunds on housing, dining and other stuff. Also, UCSD was still going to charge us for events like Sun God. And, we were angry because Sun God got cancelled. Overall, we were angry because our freshman year was essentially going to shit, so we thought. However, things went about as normal as it could, but there was still talk in the air.

On Wednesday, things started to change. My in-person discussions and lectures got cancelled. I was actually happy as hell, as I could do nothing all day essentially. When talking with the lab managers, they all seemed chill, and they were going to continue as the day goes. However, the news was definitely making things scarier. Famous celebrities, like Tom Hanks and Trudeau’s wife were even diagnosed, and the virus was declared as a global pandemic. In the evening, after receiving this news things started to become a lot more serious for me. I remember telling my friends to not come to San Diego, as I was not even sure if I would be here next quarter.

Thursday, was when I bargained. It was the height of confusion and speculation. All of our finals were moved online, or cancelled. There were no classes, and essentially I had nothing to do. On top of that, all my suitemates, who were once confident they were staying, were leaving. News was flying around, about toilet paper shortages, shutting down the country and airports, lockdowns of grocery stores. The general consensus from the school and school body was, “Go home! Get out!” However, I was still adamant on my decision of staying for Spring Quarter.  I didn’t want to waste the money I spent on dining, and also I didn’t want to abandon my lab positions and seem “unprofessional and lazy”. I was trying to convince myself to stay at UCSD, because it would help my career. “Yah, it might be actually socially dead and I might step out of my room once a day, but at least I’ll be improving my career,” I tried telling myself.

Friday, was when shit hit the fan. I had no motivation to do anything, or study for anything, including my impeding finals. My roomate’s sister came over, and was debating whether or not to go to Mexico. We told her no, but she still went anyways (and she’s currently still there, probably going to get quarantined). My suitemates plans for international trips were cancelled, and even I, was considering changing my plans and coming home. I decided to come home early next week, since all my finals were going to be online anyways. But I still felt a feeling in my stomach as if something was going to happen.

As fate would hold, we found out that UCSD was doing the unexpected, and willing to give us refunds on housing. This changed everything.  There was really no point in me staying on campus and waisting money…except for the lab positions. After having a long talk with a trusted advisor, friends and my parents, I decided it was in my best interest to leave UCSD for spring. I was heartbroken, not wanting to end everything so early. It all felt so surreal.

The same day, my friend and I went to get free Pizookies at BJ’s, but we had to wait 20 mins for our table. So we decided to wander around aimlessly in Whole Foods for the time being. Seeing all the empty racks made me realize: wow we really are in a pandemic. After coming back,I saw someone in my suite already moving out–officially making it our final day together as a suite. I called my dad, and he decided to come and pick me up on Sunday.

Saturday was depressing. Everything felt surreal and I still hadn’t realized that I was leaving. I did some packing and went out to shitty Cafe V for the last time with my roomates. I sent emails to my lab professors, all of whom were very supportive. However, I was still sad that I was leaving my independence and the bundle of new memories that could have been if there was a spring quarter. News was still flying around of the virus.Sunday I officially left. It was super super sad. Coming home, the first thing my mom told me was, “Wash your hands.”

And today, I went panic shopping/stalking with my parents. It has been the first time that it officially hit me: we are in a pandemic.

Honestly, everyone feels cheated—especially me. I feel like I left college unfinished, and I’m unconsciously expecting to go back for Spring. Additionally, I’m unmotivated and anxious to study for finals but can’t physically bring myself to study.

However, eventually life will move on and I’ll get to the silver lining, understanding not to take life for granted, a day I’m still waiting for…

Put Down Your #2 Pencils: The University of California Will Eliminate SAT/ACT Scores by 2025, Part 10 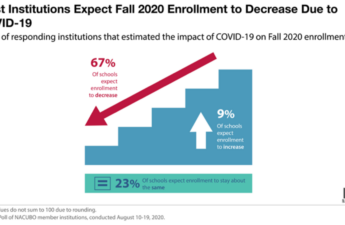 Trouble in the College Market