As I posited in Part 1, although an exact date is impossible to state, sentiment amongst college graduates is set to decline (as seen in the graph above), testing and possibly exceeding the 2009 lows. As the last of the Millenials graduate college this year (2019), many are disgruntled that the financial prosperty promised by previous generations is not their economic reality. So, what are the foundations of Millenials’ economic disappointment and the cause of the imminent decline in sentiment amongst college graduates?

As illustrated above, Post-WWII, a cohort within each successive generation were able, if willing, to achieve a greater standard of living than the previous generation. Generally, wide-ranging economic opportunities existed, encompassing manufacturing and skilled labor jobs alongside service careers. So, although attending college to earn any degree was a worthy goal, it was not a necessity to become financially secure.

Yet, beginning in the 1970’s, the number of American manufacturing jobs decreased and the American economy, for a variety of reasons, transformed into a service-based economy, where knowledge and the application of knowledge are essential skills for workers. Since colleges are long-established institutions where individuals can develop greater knowledge, college-going rates steadily increased, as young people sought prosperity in the new economy.

By the 1980’s, more Americans matriculated through college and despite economic downturns, amassed financial wealth. So, although their wealth could not necessarily be correlated with a college degree, nonetheless many college graduates perceived their degrees as a causation. Thus, a confirmation bias developed where a college degree equaled “A Golden Ticket” which seemingly guaranteed a greater standard of living than one’s parents and peace of mind.

The media further perpetuated the biased value of a college degree, and the American Educational Industrial Complex was reoriented, democratizing access to college education as its primary mission, further promoting college as the most proficient means to a “good” job. So, greater proportions amongst our youngest generations, including Millenials born in the 1980’s, were consigned (or conscripted) to seek college admissions in hopes of acquiring the perceived store of financial value and happiness.

Also, in the 1980’s, the American economy bifurcated with the expansion of the healthcare and technology sectors, subsequently creating a greater number of jobs with greater earning potential than other job sectors in the economy “requiring” college degrees. Thus, Millenials’ parents nurtured a “College STEM (Science, Technology, Engineering, and Mathematics) degree or Bust” mentality so their children would seemingly be most assured economic success. Yet, Millenials quest for “The Golden Ticket” sometimes came at the cost of nurturing their inherant abilities, especially if their abilities did not seemingly align with wealth-generating careers.

As Millenials began attending college, the greater numbers of students have taxed colleges’ ability to “supply” education—meaning class sizes increased, selectivity in the admissions process intensified, and the price of college increased each year for the last three decades as a rate much higher than other consumer goods. Thus, in the frenzied attempt to safeguard an ever-elusive financial security, generations of Americans have willingly borrowed from tomorrow’s income to pay for annually-rising college tuition, today resulting in record total student loan debt, currently $1.65 trillion and growing.

Furthermore, Millenials graduated from college amongst the economic aftermath of the Great Financial Crisis of 2008. Over the last eleven years, the wealth generated from a record global economic expansion has disproportionately benefitted the top 1% of individuals. Plus, the socialization of opportunity through the internet where content is expected to be obtained for free has diluted real economic value. And, lastly, the inflated numbers of college graduates deflates wages as companies can pick and choose amongst the sea of qualified candidates to fill their limited job openings. So, Millenials stumble to actualize the promised wealth and prosperity that their parents and grandparents achieved, after spending a lifetime dedicated to seeking the perceived value of a college education.

Now, disaffected and angst-ridden from failing to realize their expectations, many Millenials and increasing numbers of Gen Z’ers, have begun challenging their elders’ assumptions about the perceived value of a college degree. Hindered by record student debt, the most recent college graduates and those in their early adulthoods are also facing complex, globalized social and economic issues.

Thus, in my next post in the series, I’ll first discuss how annually increasing college costs are leading to record student debt, which is compounded by current economic circumstances. Then, I’ll further explore the current economic opportunities facing college grads, as I conclude my argument why sentiment is decreasing amongst college graduates.

At Creative Marbles, we help families seek value in education. We believe that through eduction, individuals should develop an understanding of themselves to create prosperity. Contact us at (916) 769-6092 or info@creativemarbles.com 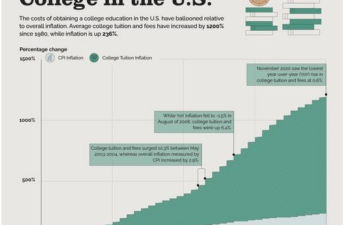