As regular readers recall, the news about stagnant American household median income is not a new story, more of an evolving story about how more American middle class families are adjusting to life with less income.  Lifestyle adjustments are just one possible shift in American households.  More often, I’m hearing parents ask questions about how to say, “No” to their children about particular college campuses, either before applying or after acceptance, since the tuition and overall costs are beyond the family budget.  These parents are conflicted, as they don’t want to limit their children’s educational opportunities, especially after a lifetime of telling kids to try their best and become academically successful.  At the same time, parents are concerned about paying for multiple offspring in consecutive years of college payments, not bankrupting their children with student debt before their careers even begin, nor shortchanging themselves from retirement savings.

A recent article in the New York Times sheds additional light on the stress many middle class American families are experiencing:

The American middle class, long the most affluent in the world, has lost that distinction.

While the wealthiest Americans are outpacing many of their global peers, a New York Times analysis shows that across the lower- and middle-income tiers, citizens of other advanced countries have received considerably larger raises over the last three decades.

Although economic growth in the United States continues to be as strong as in many other countries, or stronger, a small percentage of American households is fully benefiting from it.

Consequences of slowed growth in middle class income has been shown in the development of younger generations, which may have longer term impacts economically:

First, educational attainment in the United States has risen far more slowly than in much of the industrialized world over the last three decades, making it harder for the American economy to maintain its share of highly skilled, well-paying jobs.

Americans between the ages of 55 and 65 have literacy, numeracy and technology skills that are above average relative to 55- to 65-year-olds in rest of the industrialized world, according to a recent study by the Organization for Economic Cooperation and Development, an international group. Younger Americans, though, are not keeping pace: Those between 16 and 24 rank near the bottom among rich countries, well behind their counterparts in Canada, Australia, Japan and Scandinavia and close to those in Italy and Spain.

[C]ompanies in the United States economy distribute a smaller share of their bounty to the middle class and poor than similar companies elsewhere. Top executives make substantially more money in the United States than in other wealthy countries. The minimum wage is lower. Labor unions are weaker.

And because the total bounty produced by the American economy has not been growing substantially faster here in recent decades than in Canada or Western Europe, most American workers are left receiving meager raises.

As a result, American families are showing waning confidence:

Whatever the causes, the stagnation of income has left many Americans dissatisfied with the state of the country. Only about 30 percent of people believe the country is headed in the right direction, polls show.

“Things are pretty flat,” said Kathy Washburn, 59, of Mount Vernon, Iowa, who earns $33,000 at an Ace Hardware store, where she has worked for 23 years. “You have mostly lower level and high and not a lot in between. People need to start in between to work their way up.”

Although concerns are not unique to only Americans:

Middle-class families in other countries are obviously not without worries — some common around the world and some specific to their countries. In many parts of Europe, as in the United States, parents of young children wonder how they will pay for college, and many believe their parents enjoyed more rapidly rising living standards than they do. In Canada, people complain about the costs of modern life, from college to monthly phone and Internet bills. Unemployment is a concern almost everywhere.

Indications of more economic uncertainties can be a forewarning for American families.  For one, a greater consideration of the value of a college degree in selecting colleges for application and enrollment may be warranted.  Second, climbing the steep learning curve of career development may be a more immediate necessity from the first days of college, than previous generations. 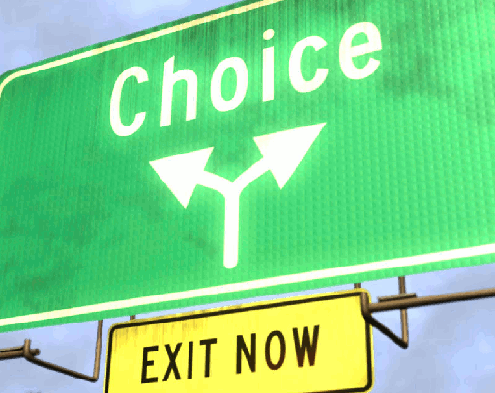 The Responsibility of Choice